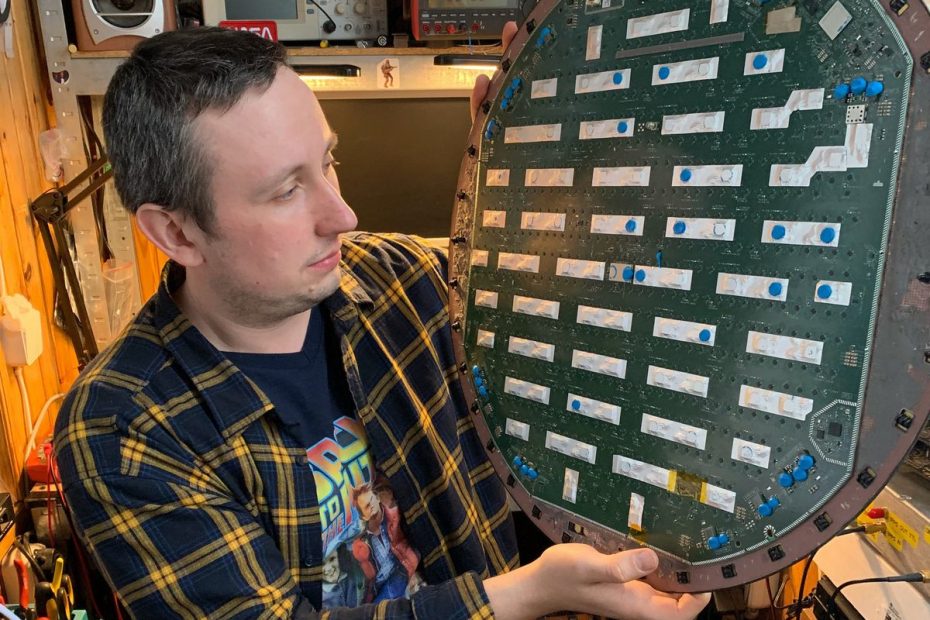 On Monday night, in between the hourly air alarms that were reverberating outside his home, Oleg Kutkov stuck his SpaceX Starlink dish outside of his window in Kiev, Ukraine and pointed it up at the sky. To his surprise, he got a signal in just 10 seconds from one of SpaceX’s satellites overhead, indicating he was receiving Internet broadband.

“I honestly I didn’t believe that it would work.”

Kutkov has actually had a Starlink dish for a few months now, but wasn’t able to use it. A software and communications engineer, he bought his off eBay — where dishes range from $2,000 to $3,000 — in order to reverse engineer the device and learn more about it. The person he bought the dish from transferred his US account to Kutkov, though there wasn’t much Kutkov could do with it, as Starlink service wasn’t available yet in Ukraine.

He wrote an article about his reverse engineering efforts, which garnered him some contacts within SpaceX, he says. He had also tried switching the address on his account from a US address to his own in Ukraine, but SpaceX support told him his location wasn’t supported. Kutkov paid for the account anyway “to keep service alive for my experiments and…just in case” he said through a Twitter message.

But this week, everything changed. Over the weekend, Mykhailo Fedorov, Ukraine’s vice prime minister tweeted at SpaceX CEO Elon Musk, asking him to provide his company’s Starlink service to Ukraine to help in the fight against the Russian invasion. Starlink is SpaceX’s developing internet-from-space program, which envisions launching tens of thousands of satellites to low Earth orbit to beam Internet broadband down to surface. To tap into the system, individuals must have one of SpaceX’s user terminals or dishes. (Kutkov refers to his as Dishy, likely a nod to SpaceX’s nickname for the antennas, Dishy McFlatface.) SpaceX’s satellites must also tap into gateways on the ground, which are connected to existing fiber-optic infrastructure.

When Musk responded to Fedorov’s tweet saying that Starlink service was now active in Ukraine, Kutkov decided to give his account another shot. He tried connecting his dish to his account, but the attempt failed at first. But then, Kutkov says SpaceX support reached out to him and told him his account should connect now. On Monday night, just after Fedorov tweeted a picture of a truckload of Starlink dishes that had arrived in Ukraine, Kutkov stuck his dish outside his window to prove that the service was working.

He sent out a couple tweets showing his download speeds, claiming he was able to reach a top speed of more than 200 Mbps. SpaceX has nearly 2,000 active Starlink satellites in orbit at the moment, and a handful orbit above Ukraine at any given time. Additionally, an unofficial map of Starlink’s infrastructure shows there are gateways in a few neighboring countries of Ukraine, which should help to keep the satellites connected.

Kutkov’s little experiment was only a test, as he doesn’t plan to use his Starlink dish full-time. He says he has a really good connection to fiber-optic internet, which hasn’t had any disruptions so far. Plus, Kutkov tinkered with his dish so much that it can’t even scan the sky anymore, as he removed the antenna’s base. Ultimately, he just wanted to show to the people of Ukraine that Starlink is operational at the moment.

“I thought that I could test it and report to everyone that, ‘Yeah, this is working in Ukraine. So it’s good to go,’” Kutkov says.

Of course, he understands that his internet infrastructure could change in an instant. Just before speaking with The Reporter Door, Kutkov’s colleague witnessed Russia attack a television tower in Kiev with an airstrike, a seeming attempt to disrupt the city’s communications. So it’s possible Russia could target Kiev’s existing internet system too. Kutkov also mentioned that he’s a bit cautious about using the Starlink dish regularly as there has been speculation that the equipment could make him susceptible to Russian airstrike’s as well. “I don’t know if that’s true or not, but from a technical point of view, it’s possible,” he says. “So I will be very, very careful.”

“We’re going to stand and protect our property.”

After sending his tweets, he says he received a lot of messages from citizens of Ukraine asking where they could get a Starlink dish, and he had to explain that his came from eBay. He says he is unsure how the Ukrainian government plans to distribute the dishes, acknowledging that such a task could be pretty difficult right now. Air sirens warning of impending attacks have increased in frequency, he claims, and nearby explosions are becoming more regular.

“Living here in Eastern Kiev, I did see real explosions,” he says. “The first explosion was at four in the morning when I was sleeping, so it’s kind of insane. Yesterday we got really loud explosions in our neighborhood. Our house was shaking.” He says he and his family does have a basement that they take shelter in when attacks occur.