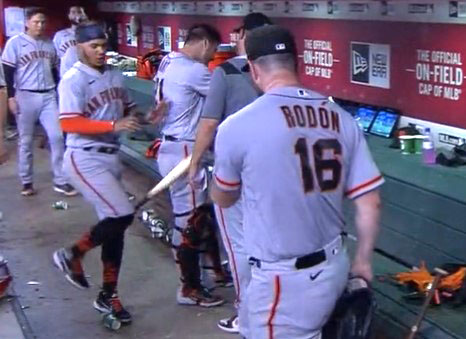 Carlos Rodon has had a good season for the San Francisco Giants, but Tuesday night was not the right-hander’s finest hour.

A frustrated Rodon, who struggled in the Giants’ 7-3 loss to the Arizona Diamondbacks, kicked a bat and struck teammate Thairo Estrada in his right leg. Estrada was able to get up but was limping.

It wasn’t Rodon’s only outburst in the Giants’ loss. He also angrily threw his glove in the dugout at the end of the second inning after giving up a two-run homer to the Diamondbacks’ Sergio Alcantara.

Despite his tantrums, Rodon still could be a trade-deadline target for contending teams looking to improve their starting pitching.