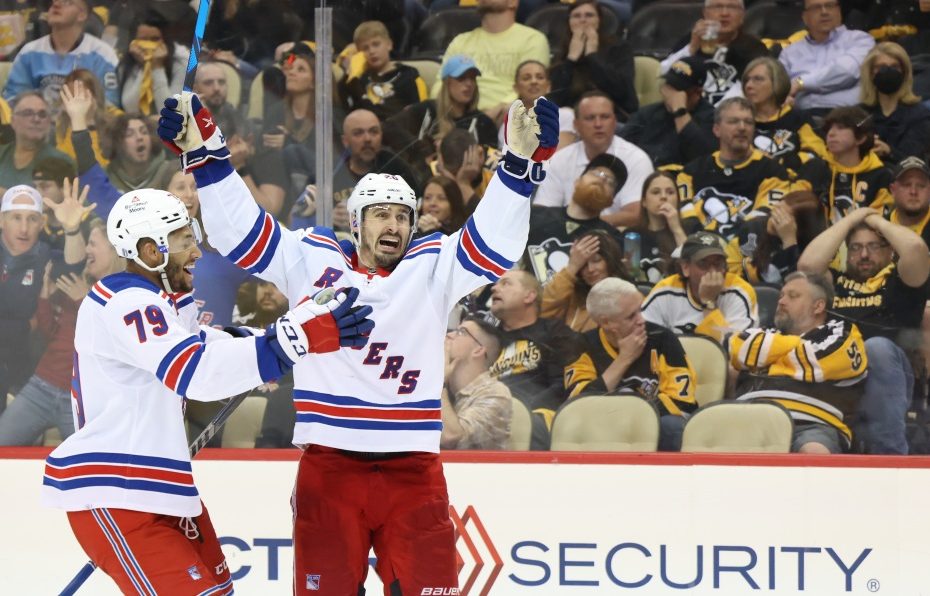 PITTSBURGH — Madison Square Garden will get its first Game 7 since 2015.

Chris Kreider scored with 1:28 left in the third period and the Rangers beat the Penguins 5-3 in Game 6 of their first-round playoff series at PPG Paints Arena on Friday night.

The goal came after Kreider snapped a long shot, on which Penguins goalie Louis Domingue made an initial stop before it popped over his head. Andrew Copp added an empty-net goal with 27 seconds to go as the Rangers staved off elimination for a second straight game.

Mika Zibanejad, who had been a non-factor for a majority of the series due to his matchup with Sidney Crosby and the rest of Pittsburgh’s top line, broke through with two goals and an assist on Kreider’s winner.

After getting outplayed in the opening 20 minutes and falling into a 2-0 hole, the Rangers’ power play (the version from the regular season and not from the previous five games) scored twice in the second period to spark one of the classic comebacks that have been part of the club’s identity all year.

Ryan Lindgren got away with a cross check on Evan Rodrigues into the boards and the Penguins winger was hit with a roughing penalty for retaliating. The Rangers made quick work of their first power play of the night, with Zibanejad scoring his first of the series just over five minutes into the second period.

Post Sports+ members, sign up to have Mollie Walker text you the latest word on the Rangers and reply with your thoughts and questions. Not a Sports+ member yet? Try it now.

That goal opened the floodgates for Zibanejad, who blasted a one-timer from the top of the left circle 1:16 later to knot the score 2-2.

After fending off the Penguins’ second five-on-three opportunity of the series, the Rangers had the momentum of their side. And when Mike Matheson was called for a four-minute high-sticking penalty that drew blood on Frank Vatrano, they didn’t let a golden chance pass them by.

Rangers goalie Igor Shesterkin launched the puck down the ice to spring Zibanejad and Kreider for an odd-man rush. Kreider then cleaned up the garbage on a rebound to give the Rangers their first lead of the night, 3-2, at 13:48 of the second period.

Charged with stepping in for Crosby, who sat with a concussion, Penguins center Evgeni Malkin picked off a weak pass from Jacob Trouba and buried one on a breakaway under Shesterkin’s glove to tie it up 3-3 with just under 3:30 left in the period.

Tha fans at PPG Paints Arena, or Shesterkin’s House of Horrors, went to work on getting in the Rangers star goalie’s head before the national anthem even sounded. From repeating his name in a taunting fashion — as they have all series — to chanting “Igor sucks,” the Pittsburgh fans didn’t hold back.

They levied boos at Trouba, who was responsible for sidelining their darling Crosby, whenever he touched the puck. They cheered as if the Penguins had scored each time the Rangers defenseman was hit.

The Rangers had talked about weathering the Penguins’ storms all series long and that if they could just get through a few of them unscathed, they’d be able to generate their own momentum shift. Well, the Rangers spent a majority of the first period in a hurricane and simply had no answer.

Pittsburgh peppered Shesterkin and created havoc around his net before Jeff Carter banged home a rebound at 14:12. The Penguins’ top line, with Malkin replacing Crosby in the middle, proved it doesn’t need Crosby when Bryan Rust’s one-timer off a royal road pass from Jake Guentzel made it a 2-0 game heading into the first intermission.